Measuring What Matters in Super Bowl Ads: The Results

Posted by Jeff McKenna on Fri, Feb 12, 2010
In the aftermath of the Super Bowl Ad frenzy, let's take a look back at what is really important.  Do all of the polls rating the "best" and "worst" ad really matter?  If a company is in the business of creating a deeply moving or humorous ad, then these polls may have some meaning.  However, I don't think Doritos is solely in the business of creating advertising; Doritos is in the business of selling chips.  A more appropriate (though, not only) manner of assessing advertisements is to consider how well the target market for the respective products and services received the ads. 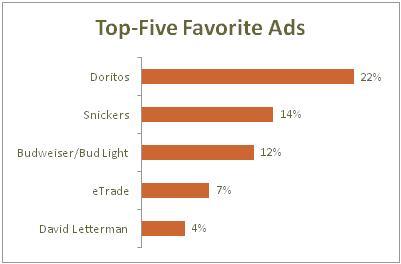 Using our own market research, we took a look at some more meaningful results from the advertising Super Bowl the day after the Super Bowl to explore preferred advertisements and the actions taken by the viewers.  By examining these results more closely, we can gain a better understanding of ad "performance."

Doritos, Snickers and eTrade were three of the top brands people cited when asked to list their favorite ad.  But, the real story is what is happening underneath these numbers, looking at the results by age and income.

When we examine the popular ads by age groups, Doritos resonated extremely well among younger viewers (31% of viewers under 35 years old identified the Doritos ads as a favorite).  Given that Doritos likely targets younger buyers, this result is not too surprising.  On the other hand, the Snickers ad performed remarkably well among viewers 35 and older (17% of viewers 35 and older selected the Snickers ad), on par with the Doritos ads (which was also mentioned 17% of time by the older viewers).  Was this a goal of the Snickers ad?  The use of vintage-1970s actors, Betty White and Abe Vigoda, appears to have struck a chord with older viewers, while falling relatively flat among younger viewers. 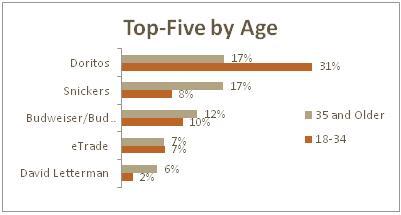 We found another interesting difference in ad reception among income categories.  The eTrade ads performed extraordinarily well among middle income ($50,000 to $74,999/year) viewers (identified as a favorite by 12% of the middle income group), while higher income groups gave it far lower interest (identified by 5%).  Interestingly, preference for the David Letterman ad is directly related to income; so much so, that viewers earning $75,000 and over preferred the Letterman ad to the eTrade ad. 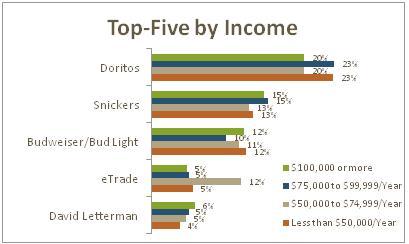 Who am I to say the specific intentions of eTrade in their communications strategy?  Perhaps, eTrade is focused like a laser on the middle class - and this ad campaign can be considered very successful.  Likewise, Snickers may be trying to expand its market into adults over 35, while Doritos is trying to stick to its knitting and lock up the under-35 market.  However, before we crown any ads as "best" or "successful" we need to add context and assess outcomes based on how well these resonate with target markets to buy their products or services.

Contrary to some people's beliefs, not all small businesses are the same regarding health insurance needs, buying processes, and hot buttons.

Watch the full Webinar from CMB and Premara Blue Cross

Posted by Jeff McKenna.  Jeff is a senior consultant at CMB and a lover of both Cleveland Browns football and NFL related advertising.