A Market Research Take on the LeBron James Saga 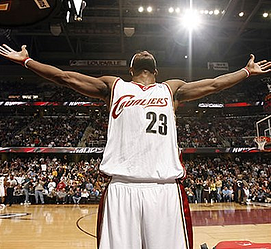 At 9:00 PM tonight east coast time, the NBA’s LeBron James will announce which city he will be playing basketball in for the next 5-6 years via a one-hour special on ESPN.  As a near-rabid Boston Celtics fan, I’ve been spending a bit too much time lately thinking about LeBron's destination (and other free agents), and frankly tonight’s spectacle has me fascinated.  Fascinated as a basketball fan, and probably fascinated as a wannabe agent and/or high-profile public relations executive. Given that my day job is as a market-research-based consultant, however, I figure that if I’m going to be spending any time today thinking about LeBron, I better tie it in to what I really do in some way.  Below is my (somewhat feeble) attempt at this.

Sure, on one hand, market research is a science.  And each of us who work in the industry can likely spout off a couple hundred 50-cent words related to methodology, sampling, or analysis.  But where the rubber really meets the road is when we recommend to our clients (internal or external) what they should do about what the numbers say.  One thing that all great market researchers (and the business decision makers they partner with) do is to always consider “The Law of Unintended Consequences” [screen fades to rolling thunderstorm with lightning and Vera Miles simultaneously screaming from the shower at the Bates Motel).  Given ESPN’s insiders are largely reporting that LeBron is likely headed to Miami, I’m worried that LeBron and/or his advisors have either not considered this “law” or haven’t considered it from the right angles.   So, I’ll use this forum to take my shot at it.

There’s an old saying in supplier-side Market Research: “Good, Fast, and Cheap.  Pick 2.”  Those of you who work in research know exactly what I mean.  I think LeBron faces a similar trade-off (I promise not to start delving into the relative merits of Dual Choice Based Conjoint versus Adaptive Choice Based Conjoint as much as many for you may hunger for that).  I think the three legs of LeBron’s choice set are:

Where’s money you ask?  I consider money a constant in this equation (and we market researchers love constants).  He has the best combination of cost of living and tax rates in Miami.  He can get the most guaranteed money from the Cavs.  He has the best baseline opportunities for sponsorship dollars with the NY Knicks – likely followed by New Jersey (soon to be in Brooklyn), Houston (connecting with Yao Ming and his huge following in China) and other big-market teams like the LA Clippers and Chicago Bulls.  In my mind, this all evens out.  With the right people advising him, he can earn crazy, and “about equal” money in any of these destinations.   Therefore it is probably not a key driver of his decision due to a lack of variation in this independent variable (how’s that for fancy market research lingo?).

I’m also taking “lifestyle” out of this equation.  If I can travel 75-80 nights per year, criss-crossing the country in coach class all the way, then LeBron can make any of these cities work.  Again, given his resources, and the fact that we’re talking about a relatively short span of what I hope is a long life for him, I just can’t see this being as salient as the other three.  Maybe he’s considering it, but it must be a secondary or tertiary driver.

We market researchers love matrices, don’t we?  I do anyway. Below is a matrix I’ve created to summarize the “performance” results on what I think LeBron should be considering in his decision for each city.

My simple analysis says that he should pick Cleveland, but I could also easily support a decision to join the Knicks or maybe even the Nets.  But Miami?  I just don’t see it.  “Championships” seem a fickle basket to put all one’s eggs in, as basketball is a team sport and injuries and other human tragedies happen.

And to spend an hour telling us that he’s decided to team up with two other superstars all making maximum money?  It feels like a possible PR nightmare, and it seems like cheating to me, Yankees style.  The ultimate dismissal of The Law of Unintended Consequences.   (Note: I fully expect that this will result in many nasty posts about the Celtics and Red Sox from my NY friends who will perhaps rightfully call me hypocritical).  I just don’t see how LeBron can possibly position this in an hour-long special, and then choose anywhere other than Cleveland or New York.  The only spin I can see his team giving this is the “became friends while representing the USA during the Olympics” or “laser focused on winning.”  But I think we’re too smart to fall for the flags, and Tiger already owns the “laser focused on winning” brand, perhaps to his own detriment.

My real problem is that I love LeBron the player, and everything I’ve read about him the person.   I think he’s going to be making a mistake in a few hours.  LeBron - if you’re listening, pick Cleveland, or the Knicks.  And if you’re worried about being stuck for 6 years, how about structuring a deal so that years 4 and 5 are player options, and year 6 has both a player and a club option.  This all seems fair to me, and both the Cavs and the Knicks should be amenable – as there is no viable Plan B.

Editor's Note:  Brant is a great researcher, despite his lack of success in this prognostication.

Posted by Brant Cruz. Brant is a VP and segmentation guru at CMB. He is also proudly the judge of the Brant Approved awards in our upcoming CMB Cookbook and the self proclaimed funniest man in market research.