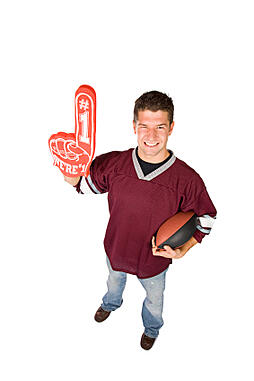 Does this past Super Bowl (53.3+ million households) truly represent a 20% increase in the number of viewers since the 1990s?  Keep in mind that the number of households in the US has increased by just 15% in that time (from ~100 million in the late 1990s to ~115 million today, US Census Estimates); so, perhaps this substantial growth in households viewing goes beyond simply “more people watched the Super Bowl”.  Let’s think about the viewing dynamics – and perhaps the fact that we are seeing one of the best examples of people spending time "Alone Together" rather than spending more time actually watching the game.

We first took a look at this last year when we ran our CMB Consumer Pulse study about online activities during the Super Bowl and we saw the phenomenon beginning to unfold. Even last year we found people were not watching the game “alone”; nearly two out of five people (39%) watching the Super Bowl in 2010 spent time online at some point during the game.  I suppose this is not unexpected – the average football game has about 11 minutes of action, so over the course of the 4 hours when the Super Bowl is broadcast, there is a lot of “empty” time.

But, this year in particular the sheer volume and nature of the online activity reflects people watching the event together, but in separate locations.  Consider the immediate reaction to the advertisements: this year you could see ads succeed or fail in seconds on Twitter and Facebook (instead of waiting to hear about it at the water cooler).  MarketingProfs reported there were 255,431 social conversations focused around the Super Bowl.

People are no longer watching the games as a group in the physical sense.  Instead, people are watching the game separately, and socializing online.  Compared to the 80s, 90s and early 2000’s, far fewer people watch the Super Bowl at parties and among groups today; instead today’s viewers are getting their “social fix” online.  This viewer dispersion (fewer people watching more televisions) may account for a substantial portion of the higher viewership.

Technologically, we find a convergence of both the ability for people to connect online and the ability to enjoy the game in one’s own home.  Thinking back to before HD and inexpensive flat-screen televisions, many people watched the game at a friend’s or neighbor’s house; since these friends and neighbors usually had the widescreen TV or made the big investment in HD TVs.  Today, many more households own HD televisions and can enjoy the viewing experience without venturing to a friend’s or neighbor’s house.  Add to this the ability to “connect” via chatrooms, Facebook, and elsewhere online, and the ability to experience the Big Game “alone together” becomes very easy.

This is not to take anything away from the Super Bowl phenomenon – it truly is one of the only “bankable” television shows, and Super Bowl Sunday is a virtual national holiday.  I believe that looking only at the simple numbers overlooks some remarkable changes in broadcast and media usage.

Posted by Jeff McKenna.  Jeff is a senior consultant at CMB and a lover of both Cleveland Browns football and NFL related advertising.