Recently I wrote about our latest consumer pulse study – “How Smartphones are Changing the Retail Shopping Experience.”  The report revealed several emergent consumer behaviors and received considerable media coverage, something that we’re all pretty excited about.  From the consumer’s perspective, the tone of my post was mostly upbeat.  And why not?  One of the key conclusions of our study was that smartphones empower consumers to find the best products and the best deals from inside the store.  What’s not to like?

As it turns out, maybe a few things.  The study also showed that consumers have a few misconceptions about how privacy works on a smartphone.  Take a look at this graph: 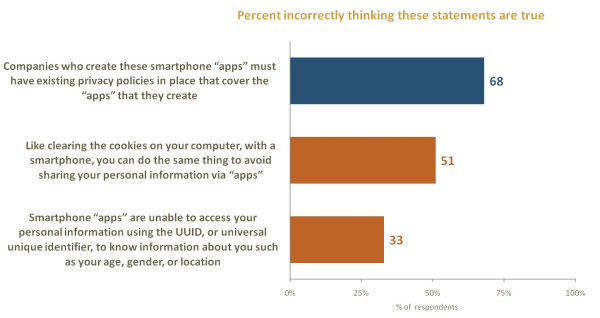 As you can see, more than two-thirds of consumers believe that application developers are mandated to institute privacy policies.  That’s incorrect.  Outside of the policies created by app marketplaces (maintained by Apple, Google, Microsoft, etc) there are currently no required regulations for smartphone apps and privacy.  As a result, there have been instances of apps behaving badly – doing things like scraping personal data and sending it to China for “marketing purposes.”

Another issue worth considering is smartphone security when the device is connected to WiFi instead of the carrier’s mobile network.  Over at GigaOM, Kevin Tofel wrote a great piece suggesting that retailers provide free in-store WiFi access to potential customers.  If that happens, surfing the web in the aisle on your smartphone could become just as risky as surfing that unsecured coffee shop network on your PC.  A little over a year ago, security researchers demonstrated that it was possible to “steal your passwords, personal info, and email credentials” from Apple, Nokia, and Android devices connected to WiFi networks.

Ultimately, consumers don’t yet see a fundamental difference between the risk taken while shopping on a PC versus shopping on a smartphone. 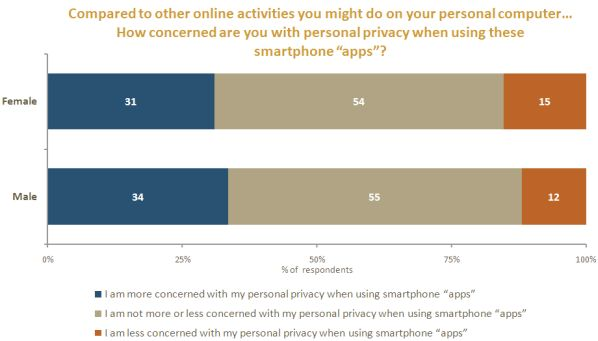 It’s hard to blame them.  Even among security professionals, there exists a fair amount of fear, uncertainty, and doubt around the idea of smartphone security.  A panel on mobile security threats at last month’s RSA conference downplayed what has become an enormous industry issue.  In sum:  “It’s not nearly as dangerous out there as you might think.  Not yet.”  Very comforting.

For more info download our recent Consumer Pulse report on smartphones and the retail shopping experience.

Posted by Brian Neville-O’Neill. Brian is part of CMB’s marketing team and spends quite a bit of time reading and writing about market research.And now he's thinking twice about just how safe those apps are on his smartphone.