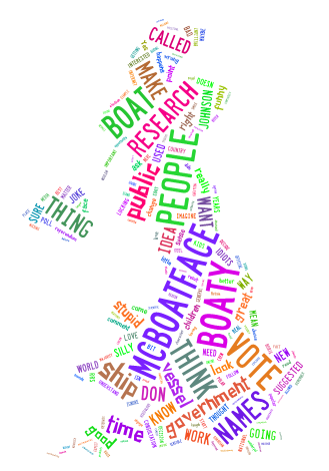 In case you missed it, the UK’s Natural Environmental Research Council (NERC) asked a silly question on a serious topic, and the cyber seas responded in kind. News media and bloggers converged in viral fashion and grabbed the opportunity to steer the campaign on their own course. I put my market research cap on and joined the flotilla.

Background on the Buzz

On March 17th, the NERC agency launched a campaign to promote the future launch of their newest and largest research ship, designed to carry scientists and their equipment to the earth’s Polar Regions. Their #NameOurShip campaign invited the public to submit name ideas, and it quickly caught on as an opinion poll. The cyber buzz really unfolded after a public relations professional suggested the name “Boaty McBoatface” upon seeing other silly names people had posted, and the name sailed to the top of the boards. On April 16th, NERC pulled the plug on collecting votes, and a NERC spokesperson stressed that there is no guarantee the ship would be named after the winning entry because the final decision will be made by the chief executive of the organization.

What I Learned from Those Influenced by the Campaign

The #NameOurShip campaign was hugely successful in emotionally engaging the public, despite the backlash to NERC scuttling the winning name. People left waves of comments for NERC’s leadership to surf through.

“The only reason I ever heard of this is because of the name controversy. Far more people are likely to stay interested in Boaty McBoatface than some humdrum 'sensible' name, because it has already been adopted as a kind of maritime national pet.” (Comment posted on one of the many Boaty Blogs)

The comments made for an interesting read, and I came up with a few takeaways.

For market research to work, we need the public to be smart—not silly. There is research value in capturing emotional response, but we need to strive to capture unbiased rational opinion. Social media marketing can taint the waters for research if the public perceives a campaign as being less than honest and truthful.

The Australian Government is now pirating the #NameOurShip approach for their own new Antarctic scientific research vessel, vowing to avoid the ballast that seemingly sank public opinion of the UK’s campaign. I can’t wait to see what the Aussies come up with.

Brian is a Senior Project Manager at Chadwick Martin Bailey. Given his Navy background, he feels compelled to point out that the vessel-who-must-be-named is not actually a “boat” and should be called “Shippy McShipface.”

We're looking for people to join our team! Up for the challenge?