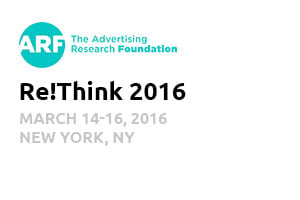 Ron Amram of Heineken uttered the three words that sum up my ARF #ReThink16 experience: science, storytelling, and seconds. Let’s recap some of the most energizing insights:

How does your company use science and storytelling to drive business growth?

Want to know more about Millennials' attitudes and behaviors toward banking and finance?