Crossing the Chasm: Is VR Gaming Finally on the Precipice of Adoption?

You’ve heard it countless times: “this is the year for VR,” “2020 is finally the year that VR will break through,” “the VR revolution is upon us.” These messages have consistently reverberated over the past 5 years, but virtual reality (VR) headsets have never quite managed to abandon the hype train. There are three reasons that help to explain why VR has stuttered:

While head-mounted VR displays have existed since the late 1960’s, modern VR headsets as we know them can be more definitively traced back to Palmer Luckey and the initial Oculus Rift prototype. After a $2.4 million kickstart campaign, the company would be purchased in 2014 by Facebook for $2 billion.  Since then, the market has proliferated with offerings from Google, HTC, Samsung, Sony, and Windows Mixed Reality. Despite these heavy hitters pushing the market forward, VR hasn’t quite managed to advance beyond the initial phase of the disruption cycle: “emergence.”

Now, more than ever, we may have legitimate reason to believe that VR could finally be advancing into the second phase of disruption: “evolution.” In this phase, technology begins to gain more mainstream traction after initial bouts of early adoption and new features, capabilities and advancements begin to proliferate. Here are some reasons to feel renewed optimism about VR’s ability to cross the chasm into mainstream appeal:

VR’s struggle with content has been a huge initial barrier. A VR headset is a significant investment, typically ranging anywhere between $500 to $1000. Compare that to the price of current-gen consoles retailing under $500 or a gaming PC (which on the lower-end may cost you anywhere from $600 to $1,000), and with the more consistent stream of blockbuster AAA and low-budget indie content, it’s no surprise that a console and/or gaming PC purchase might be deemed a safer bet. The high cost to entry for limited content makes VR a niche purchase for those with the appetite and means.

But there is currently an increasing flow of AAA content helping to drive device sales. The announcement of Half-Life: Alyx garnered so much intrigue that it led to global shortages of the higher-end Valve Index device in November (that retails at $999 for the full VR kit). Even now, device shortages mean you’ll need to wait 8 weeks for shipment of the Valve Index. In its 2020 State of the Game Industry report, GDC offers even more hope that game developers are increasingly tantalized by VR. While only 15% of surveyed game developers had stated to have developed their last game for VR (lagging PC on 54% and mobile on 40%), VR as a platform is piquing interest. 27% of game developers claimed to be interested in VR as a platform; this exceeded interest for Xbox’s next-gen device (albeit, at a time when few details were available and it was simply known as “Project Scarlett”), as well as Google’s emerging cloud gaming platform Stadia. 2020 also marks the year where over 100 VR games have hit at least $1 million in revenue, suggesting appealing content is beginning to proliferate.

VR headset manufacturers have also remained dedicated to device improvement and innovation. Screen resolutions have dramatically improved; headsets have become smaller and more agile; fields of view have expanded, and more powerful processing units embedded. One of the more pivotal innovations in VR, however, was the release of the Oculus Quest—helping to untether VR headsets from the PC, while maintaining significantly more power than weaker mobile VR headset alternatives. The untethering of the high-end VR device was a critical moment, helping to democratize VR gaming beyond those with VR-ready gaming PCs, a significantly lower price point of $400 also lowered the cost to entry. Sales of the Oculus Quest bear this out, the device is consistently sold out and incredibly difficult to find.

Gamer interest is starting to peak

In our recent self-funded research Pulse, A Gamer’s Journey, we also observed signs of optimism for VR gaming. When asked to rate interest in different emerging gaming technologies, VR trailed only next-gen consoles in interest. The youngest gamers (14-17 years old) interest in VR is almost twice that of the interest that cloud gaming or subscription-based gaming models have.

While the youngest gamers demonstrated the strongest interest, we observed strong overall latent demand for VR. Of the 4,000 gamers interviewed, 23% have actively considered a VR device, but there are still some hesitations inhibiting VR purchase. The upside is that many of these barriers feel actionable to overcome. Price remains a continued challenge, even for the more affordable standalone devices. But as the market matures, manufacturers achieve greater economies of scale and competitors potentially begin pushing prices lowers, VR should become more affordable. Increasing the prevalence of opportunities to experience VR (such as in VR arenas, albeit, a significantly more challenging feat in the current lockdown environments), and continued investment in content will help overcome the big barrier of uncertainty, which is also currently blocking growth. 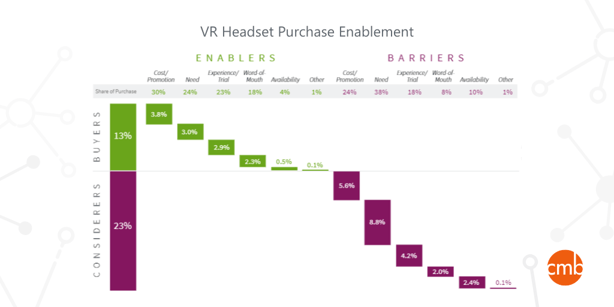 The reality of it all

As we all continue to adjust to the new reality of isolation, now more than ever, the promise of escapism that VR offers could be as compelling a proposition as it ever has been. Increasingly more high-profile content is being delivered, more headsets are entering the market, and usage statistics from services like Steam are all pointing towards a positive direction. Yet, despite this all, the potential of VR remains divisive: an exchange in Forbes perfectly exemplifies this with a May 4th article proclaiming “VR Headers Are Dying A Lonely Death,” yet on May 5th an impassioned rebuttal rejected the notion that “Virtual Reality is Dying.” While hurdles and barriers exist, this gamer remains cautiously optimistic.

Josh Fortey is an Account Director at CMB, and avid gamer.

Don't forget to immerse yourself in our latest gaming research: A Gamer's Journey | The Virtual Reality Edition. And stayed tuned for more of our findings--VR and beyond.

Find the Truths That Matter Most in Next-Gen Gaming

If you’re a studio, developer or marketer of games and/or gaming platforms, you know there are evergreen customer truths in developing a successful product, experience and go-to-market (GTM) strategy. For example, applying an influencer strategy for launches. But do those truths apply to new gaming platforms such as cloud gaming, VR, or the impending next gen consoles?

Some gaming truths are vitally relevant to these nascent platforms. But there are a few new surprises from A Gamer’s Journey. This comprehensive study of nearly 4,000 U.S. gamers rigorously explored how gamers become aware, evaluate, buy, and use traditional and emerging gaming platforms.

The three implications for studios and platformers roll up to partnering and planning even closer together to deliver the best player experience and longevity for the franchise and platform. As you read the below, the dance steps are similar, which makes dancing together much easier.

1. FEED THEIR CURIOSITY & EASE THEIR EFFORT
Even though VR products such as Oculus and Vive debuted in 2016 and cloud gaming has been around even longer, gamers spend significantly more effort in VR purchase journey (and expensive gaming PCs) compared to consoles, games and peripherals. 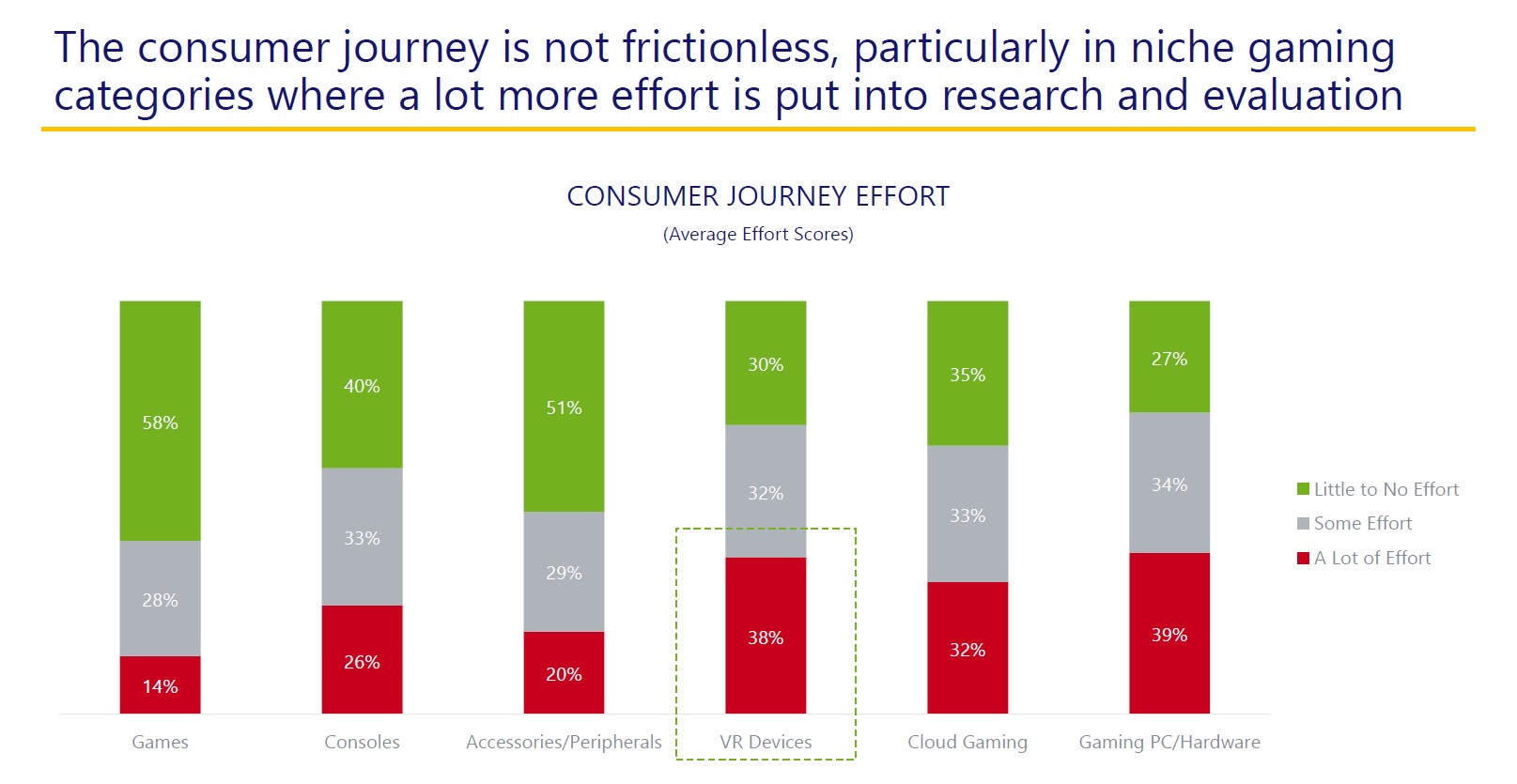 Within this category, comparing and researching products are first and bigger steps compared to more established gaming categories. That’s a lot of motivation and curiosity to feed! 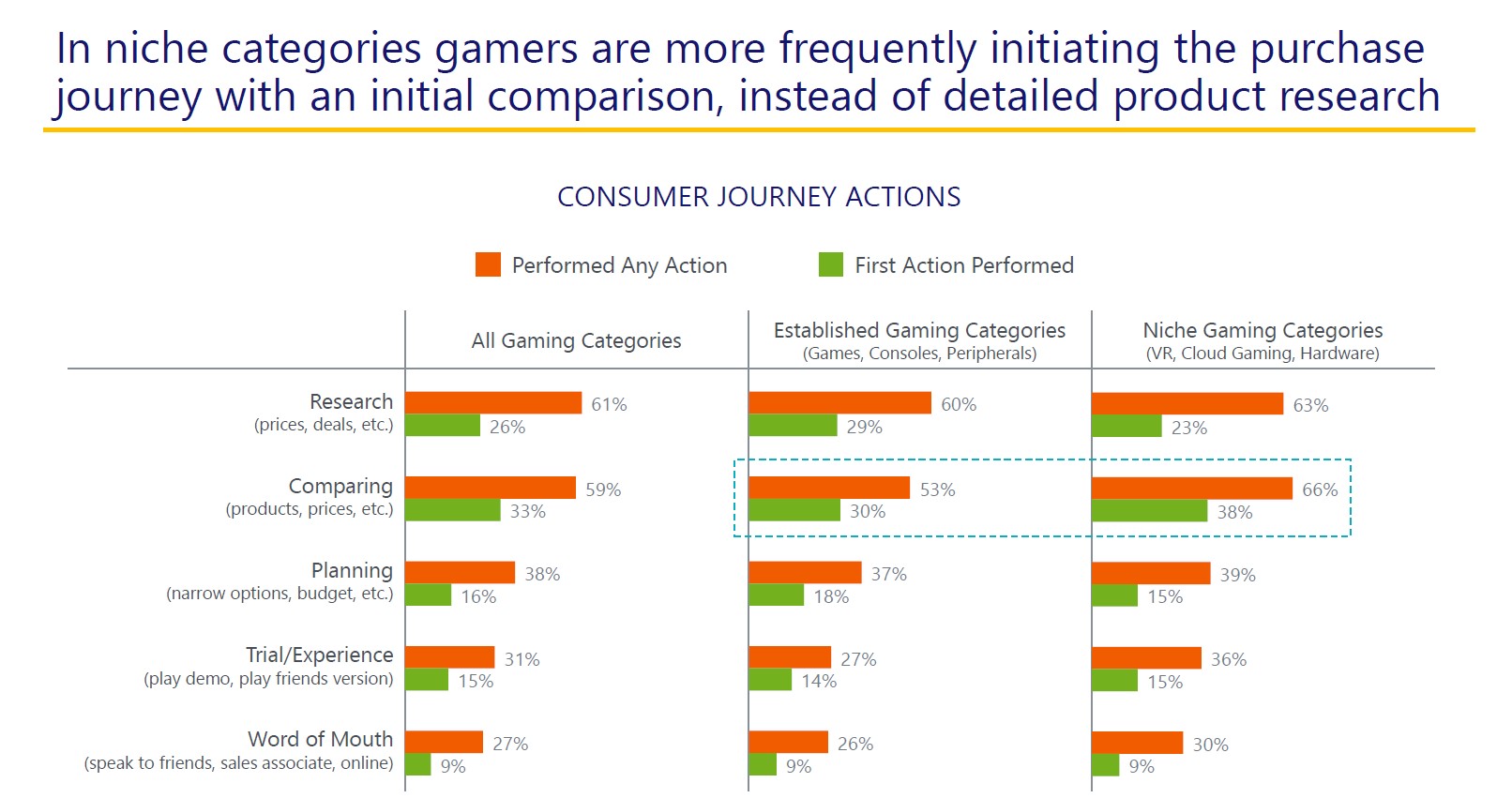 With so much time and effort comparing platforms, there’s more receptive ‘reach and frequency’ available to raise awareness of your game if it’s available on multiple VR headsets and cloud gaming services. In other words, if your game isn’t exclusively on a single product or service, it’s in studios’ and platformers’ best interest for the gamers, to feature available games with the core hardware or service specs—not a one or two clicks away or purely separate ads for games.

2. DON'T TREAT EVERYONE THE SAME
If VR and cloud gaming have been around for over four years, what type of gamers do you need to reach, and does it change your GTM strategy? It turns out the biggest detractors are casual gamers. 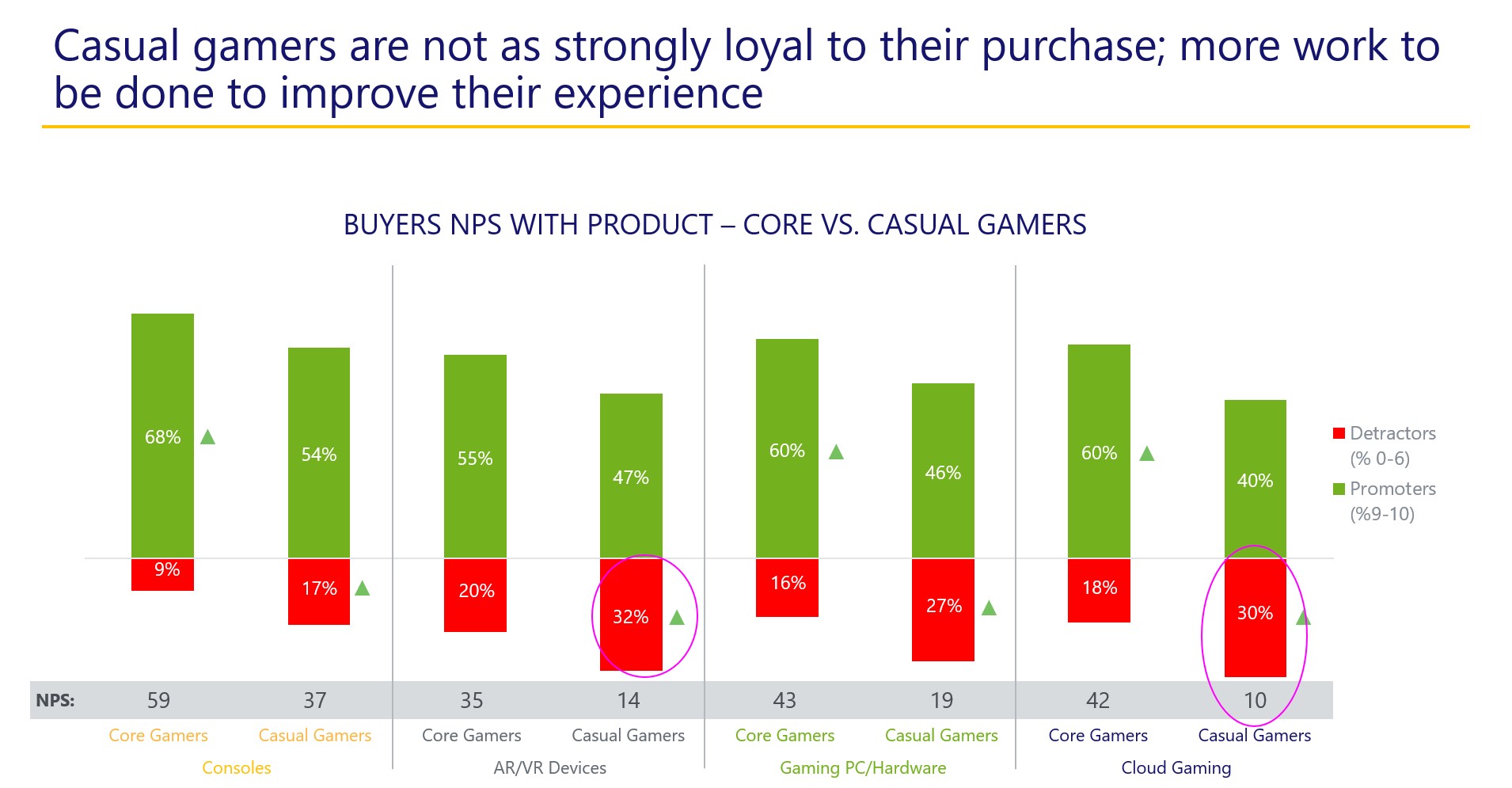 3. LOYALTY STARTS WITHIN
Managing your studio’s or platform’s reputation is reflected by how you treat your employees. With the movement of activist employees in high tech, gamers are noticing, and they care. When asked what is important to a studio’s reputation, all gamers (regardless of age, self-identified gender, platform, core or casual) agreed the top priority for studios is improving treatment of employees: “I’m more likely to buy a game from a studio that treats its employees well.”  This is much more important than managing the perception of putting profit before players or confronting wider societal issues.  People--employees and players--first. Now that’s a welcomed universal truth, pre-COVID-19, that will likely endure.


In a coronavirus world, one thing for certain is the uncertainty of the supply chain hitting next gen consoles’ Holiday 2020 launch timeframe and delivering significant unit volume availability.  And with E3’s cancellation, feeding and managing gamers’ expectations requires intense, dance-like synchronization between studios’ and platformers’ game experience availability.  The good news is this close partnership applies to cloud, PC, VR and mobile gaming too.

Brenda Ng, VP of Strategy, specializes in applying research to product development and GTM strategy and decisions, with expertise and global experience in high tech.

For more insights, please follow us on LinkedIn, Facebook, and Twitter. Don't forget to immerse yourself in our latest gaming research: A Gamer's Journey | The Virtual Reality Edition. And stayed tuned for more of our findings--VR and beyond. 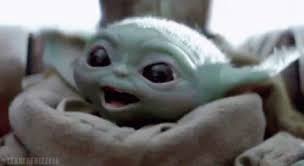