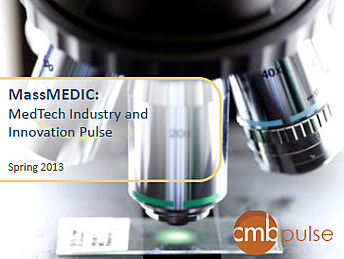 Over the past 3 years, there has been no shortage of attempts to forecast the impact of the Affordable Care Act (ACA) on patients and insurers, but the truth is, the changing care model has ramifications that extend well beyond the waiting room. The multi-billion dollar medical device industry is smack-dab in the middle of tremendous regulatory and economic changes—including the ACA and the Medical Device Excise Tax (MDET). Earlier this year CMB’s MedTech team partnered with the Massachusetts Medical Device Industry Council (MassMEDIC) to survey 123 of their members for their perspectives on the past, present, and future expectations for innovation and growth in the medical device industry. Below, are a few highlights from The 2013 MedTech Industry and Innovation Study:

The results of this study were presented at MassMEDIC's 17th Annual Conference on May 8th 2013.

Andrew runs CMB’s MedTech practice and has spent the better part of the past decade helping some of the most successful MedTech companies make difficult strategic decisions.  In his free time, Andrew enjoys scrubbing into tracheotomies with clients, and running with his dog Moby.