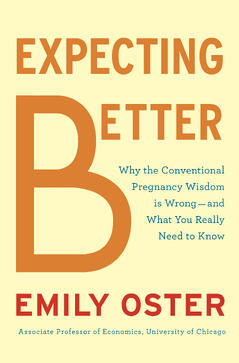 One of the wonders of modern medicine is the mountain of information available on every conceivable platform. Regardless of the condition, there are sure to be numerous sources dedicated to providing advice: chat-rooms, blogs, magazines and so on; it can be overwhelming. But, there’s one “condition” the human race has been collecting data and offering recommendations (and opinions) on since the beginning of time—I’m speaking, of course, about pregnancy.Even if you or your partner have never been, and never plan to be pregnant, you can probably rattle off a few items that moms-to-be should avoid: alcohol, coffee, cheese, fish … the list goes on. In a recent Wall Street Journal article, economist, mother, and author of Expecting Better: Why the Conventional Pregnancy Wisdom Is Wrong-and What You Really Need to Know, Emily Oster takes a deeper look at the stats in “Take Back Your Pregnancy.” Dr. Oster takes issue with the standard recommendations about pregnancy, arguing: “The key to good decision making is evaluating the available information—the data—and combining it with your own estimates of pluses and minuses.”

As a market researcher, I was drawn to Emily’s argument—a reminder to be thoughtful as we interpret information, both in our personal lives and our professional ones. This is especially important for those of us who spend our days understanding and decoding data. As a 27 year old woman, who hopes to become a mother in the next ten years or so, I was glad to hear there is good evidence I won’t need to go nine months without coffee.

O  Sample Bias: avoiding wine while pregnant (and other alcohol, too): When reviewing data comparing mothers who consume alcohol during pregnancy vs. those who abstain, it’s important to understand social norms and physician guidelines. In the U.S., drinking is strongly discouraged during pregnancy. Therefore, U.S. mothers who drink during pregnancy (vs. those who do not) tend to exhibit other behavioral and attitudinal differences. Those who tended to drink are more likely to be “rule breakers” and, in the study Emily cited, were significantly more likely to have used cocaine. Emily cites another study of Australian women, where drinkers and non-drinkers were more similar, the results of which show that light drinking (2-6 drinks a week) is fine.

O  Correlation ≠ causation: avoid coffee while pregnant: Fueled by her love of coffee, Emily was determined to understand the data behind the claim that coffee drinking is related to a higher rate of miscarriages. Digging into the data, Emily concluded, “we may well be mistaking a correlation for an underlying cause. The women who drink less coffee have fewer problems not because they limit their caffeine intake but because they tend to suffer from nausea, which inhibits coffee drinking.”

Emily also tackled soft cheese, deli meats, and weight gain during pregnancy; with the amount of research done on pregnancy, there’s no doubt Dr. Oster will have plenty for a second edition. Regardless of what you set out to research, be it brand health or your own, it’s important to make sure you understand the recommendations within the context of the findings and how the research is conducted.

Jeannine is a Project Manager at CMB. She loves to read, travel, and takes her coffee black, no guilt.