Victoria is an Associate Researcher at CMB. She loves to eat any kind of pizza, travel to (somewhat) exotic places, and couldn’t have written this post without Spotify.

Are We There Yet? How TURF Can Save Your Family Trip 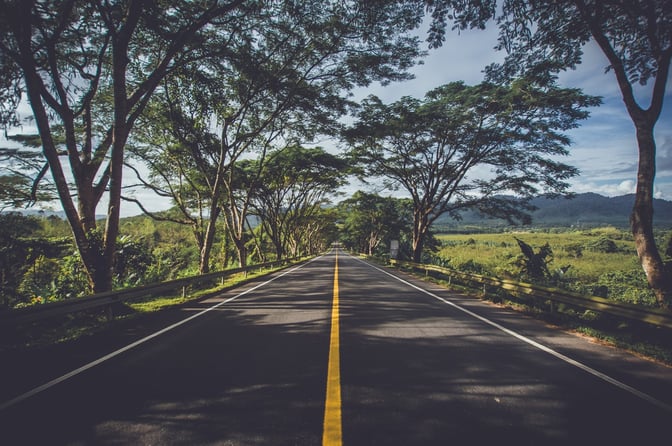 As the summer comes to a close, I’m reminiscing about the annual end-of-summer trip to New Hampshire my family used to take. There’s a lot to do and see in New Hampshire, and only having a week, we had to pick and choose how to spend our time wisely. Ultimately that decision was up to my mom, but that didn’t prevent me and my brother sharing our various opinions.

We all loved Story Land (that was a given) and it was always included on our NH itinerary… but that’s where unanimous agreement ended. My brother pined for Six Gun City–a Wild West themed park–but I preferred Santa’s Village. I thought Santa’s Village was cute while my brother thought it was tacky. Meanwhile, both my brother and I moaned and groaned when our mom insisted we hang out on the side of the road for an hour to look at The Old Man in the Mountain (RIP).

During the week, we managed to hit all desired attractions (and more), but tensions ran high some days. My brother complained at Santa’s Village while I couldn’t be bothered at Six Gun City—looking back, I can’t imagine the stress we caused our mom with our eye-rolling and sighs.

The researcher in me wonders if there could’ve been a way to satisfy everyone’s desires without upsetting some? Then I realized that this scenario isn’t totally unlike what we run TURF analyses for. If there had been a TURF analysis for our family vacations, perhaps it would’ve saved a lot of headaches.

TURF is an acronym for “Total Unduplicated Reach and Frequency.” TURF Analysis is a statistical analysis that was traditionally used to help media buyers determine where to place ads to reach the widest possible audience. But the use of TURF has since expanded to help answer product development questions like “What is the smallest number of features, services or products that could be offered to appeal to the largest number of potential consumers?”

TURF determines the maximum number of people reached by looking for unduplicated reach. For example, if Person A likes Channel X and Channel Y, and both channels are included in the analysis, the model will get no additional reach from Person A than it would’ve had only Channel X or Channel Y been included.

TURF tests each combination of options (e.g., Story Land, Clark’s Trading Post, Santa’s Village, etc.), and reports both reach and frequency for each combination. As you add items (in this case, attractions), the reach increases for a while and then tapers off. This is called the law of diminishing returns. The key is finding that sweet spot where you get the highest reach with the fewest items, and where anything above that is only incremental.

To make this more digestible, consider the example below. We’re planning a family vacation with our extended family, all of whom have varying preferences: 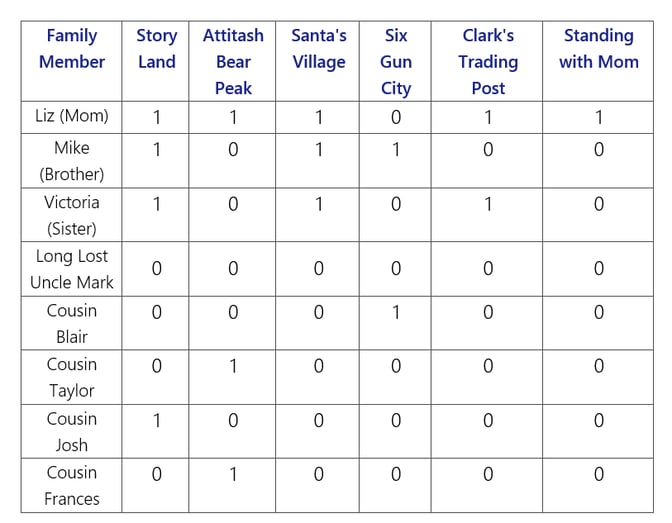 If we add Attitash Bear Peak, we come up with a total of 6 family members (75%) who get something they want.  Both Six Gun City and Clark’s Trading Post reach 2 family members, but only Six Gun City reaches Cousin Blair, one of two family members not reached by the first two attractions, bringing us to 87.5% reach.  We’re unable to please everyone, especially Long Lost Uncle Mark who appears to not enjoy anything.

As the chart below suggests, we could please almost everyone in three stops: Story Land, Attitash Bear Peak, and Six Gun City.  Instead of going everywhere, we can maximize everyone’s happiness (reach) and stay within our restrictions (budget, time, patience) by going to those three stops. 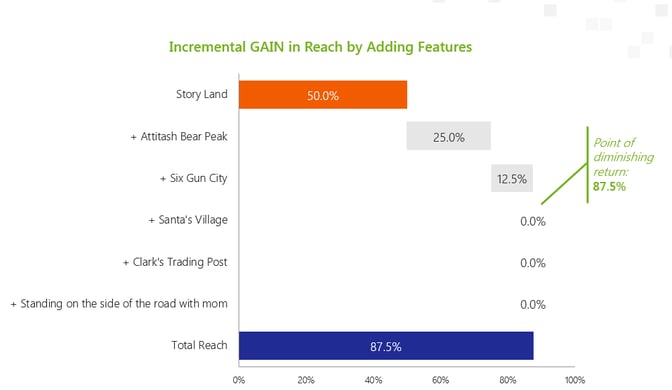 Ok, so TURF might not be the most logical answer to family vacation logistics, but it can help companies make important business decisions, especially when they are faced with multiple options and a limited budget.

So for now, my mom, brother, and I will continue to ask ourselves, who’s up for Story Land?

Victoria is a Senior Associate Researcher at CMB who still loves Story Land and traveling with her family.

Taking Our Emotions to the Polls

Whether you support Trump, Clinton, or neither, there’s no denying the 2016 race to the White House has been an emotional one.  Voters of all stripes are feeling a range of emotion from fear and anxiety to anger.

But why should a market researcher care about the emotional aspects of the election?  Because in elections, just like market research, emotions play a key role in determining future behaviors. For example, research suggests that voters’ feelings towards a candidate strongly influence not only who they’ll vote for, but if they’ll vote at all (Valentino et al., 2011; Finn and Glaser, 2010). 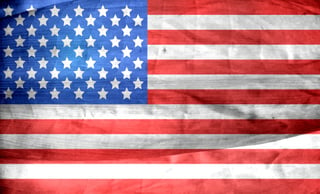 We know emotions impact voting behavior, but what’s the best way to gauge voter sentiment?  Should we look to social media?  Should we turn to neuroscience (biometrics such as fMRIs and EKGs)? In our client work, we take a quantitative approach to emotional impact analysis (CMB’s EMPACT℠) that measures brands’ emotional impact on consumers. Since Trump and Clinton have each built their own distinctive “brand” throughout the 2016 election, campaign managers might consider a quantitative “explicit” approach to measuring this aspect of consumer (and voter) decision-making. A quantitative methodology can:

In the US, voter turnout hovers around 60%.  Because researchers have found that emotional sentiment is linked to voter turnout, it’s an important part of the puzzle.  If campaigns could measure how their constituents really feel during the election process, they could more effectively tailor their campaigns to elicit the kinds of emotions that translates into votes.

Like all brands, candidates are selling themselves to the public.  A smart candidate should take advantage of techniques that will help inform how they should present themselves to voters.  But no matter how you feel towards either candidate or the election in general, go out and make a difference by rocking the vote on November 8th!

Victoria is an Associate Researcher at CMB.  She loves to eat any kind of pizza, travel to (somewhat) exotic places, and couldn’t have written this post without Spotify.